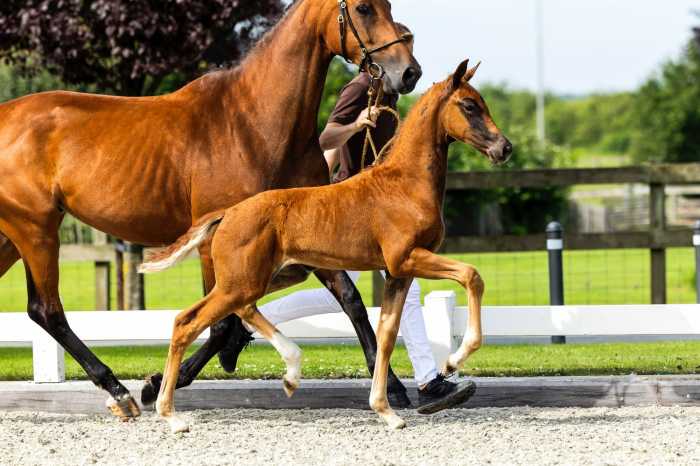 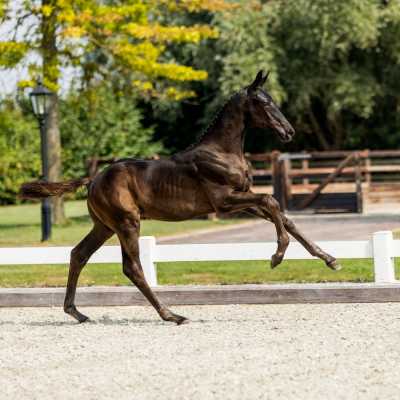 HOOGE MIERDE (EDS) – On Saturday 27 August, 55 interesting dressage foals from the collection of the EDS Prinsenstad auction will be virtually sold online. World champion Glamourdale has a son in the auction. Hermès, bronze medalist of the WC in Herning, is the sire of three auction foals and his dam Bukkie has two sons by Fürst Dior in the collection. Stallions that will participate in the World Championships for young dressage horses in Ermelo next month are also well represented in the online auction.

Pavo Cup winner My Blue Hors Santiano will travel for Denmark to the World Championships for young dressage horses in Ermelo next month. The son of Sezuan has three foals in the EDS Prinsenstad auction. Stable mate Blue Hors Monte Carlo TC is reserve for the Worldchampionships. Three foals by him are included in the collection. Kjento will defend his world title next month. A daughter of Negro’s son has been selected. Las Vegas is one of the medal candidates in the six-year-olds. The son of Ferdeaux is the performancetest champion of his year, he won the Pavo Cup and dominated the stallion competition. His popularity among breeders and the convincing foals from Las Vegas make him a top supplier with ten foals in the collection.

Gold and bronze
With the World Championships in Herning still fresh in our minds and still reminiscing about the medals won by Dutch horses, a foal of two-time world champion Glamourdale should not be missing from the auction. His mother is a daughter of Vivaldi, who also clearly showed his influence on the World Championships. Dutch champion Hermès and Dinja van Liere not only secured the Olympic ticket for TeamNL, they masterfully captured two bronze World Championships medals in the Grand Prix Special and the Freestyle to Music. The selection committee of the EDS Prinsenstad auction has added three Hermès foals to the collection, bred out of dams of Charmeur, Dayano and Don Schufro. Bukkie, the mother of Hermès, has two full brothers by the young talent Fürst Dior in the collection.

There are more foals related to horses that competed in Herning. Salsa d’Ottie (Las Vegas x Vivaldi) is the half-sister of Charlotte Dujardin’s Imhotep, who won team silver for Great Britain. Imhotep’s grandmother Uni d’Ottie has a McLaren son in the collection. Indian Rock, who impressed with Emmelie Scholtens at the World Championships, has a grandson in the auction.

Superb damlines and Grand Prix-genes
Sport is what predominates in the collection. Several foals in the collection are closely related to Grand Prix horses such as Jovian, Unée, Guess, Black Time, Chaca Time, Ambassador, Geronimo, Just Mickey, Famora, Fame, Kastel’s Nintende and Eddieni to name a few.Mare names that appear frequently in the texts of the auction foals are those of the foundation dams Charites and Fanaat. The top line of Ten Bosch from Driel, that of Dolly and other top mares are represented in the auction.

Young sires
The 55 foals in the collection mostly descend from young sires who performed remarkably in the performance test and in sport. Think of Next Romancier (2 foals), Dante US (2 foals), Livius (4 foals) and Fürst Dior also has four offspring in the online auction.